A Baptism is an initiation into the religion — a ceremony that claims the child for Jesus Christ and the Church. One of seven sacraments in the Catholic Church, Baptism is traditionally administered by a priest or deacon, but can be administered by anyone in an emergency. The typical ceremony in which you see someone either submerged in water or getting water poured on them is a Baptism. 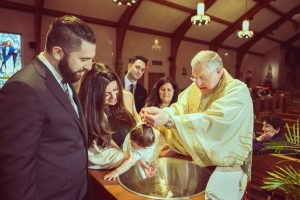 Christenings are more about naming the child and while largely associated with Christianity, forms of this ceremony are found in many religions such as Hinduism, Judaism, Islam, etc. It’s a formal procedure to announce the naming of a newborn and due to it being a smaller production; Christians and Catholics often combine it with the Baptism — thus creating the confusion.

Another factor to keep in mind is that in certain regions, Christians don’t recognize a difference in the two and they will often interchange the two words.